Chichen Itza in the municipality of Tinum Yucatán, is probably the most famous archaeological site of the Yucatan Peninsula. Declared a World Heritage Site in 1988 by UNESCO and one of the seven wonders of the modern world in 2007. Founded in the year 500 DC The archaeological site of Chichén Itzá was in its time of splendor, the home of the Mayan tribes of the Putunes and the Chontales. In the middle of the 9th century AD Both cultures were unified and made Chichén Itzá, the capital of their domain. At the end of the 10th century AD Chichen Itza suffered multiple attacks from the Toltec warrior tribe, coming to dominate the capital of the Chontal empire, and combining their cultures once again. The greatest influence left by the Toltec tribe in Chichen Itza was the representation of the serpent god Kukulkan as the main deity of the area, and in its times of splendor, Chichen Itza came to measure up to 25 square kilometers and house up to 100,000 inhabitants. All this until its alleged abandonment in 1250 AD, of which there is no exact record of why such a splendid city was abandoned.


One of the most accepted theories of why Chichen Itza was abandoned so abruptly, tells us that the multiple internal conflicts that occurred within the circles of power at that time, began to create disagreements that frequently ended in declarations of war. As a result of this Chichen Itza was divided, causing the escape of some of its factions to other territories of the Yucatan Peninsula, which weakened the power of the great city.

At the time the city was founded, it lived in a state of peace, but the situation changed rapidly as the splendor of Chichén Itzá reached the ears of the rest of the Mesoamerican cultures. Generating conflicts and wars that little by little they were denting the greatness of this ancient Mayan capital city. From the Mayan language to English, the meaning of Chichen Itza would come from the Mayan words "Chi" which means mouth, "Che'en" which means well, "Its" which means magician or witch and at the end "Ja" which means water, this translation has been interpreted as "the mouth of the well of the water sorcerers" or another accepted translation is "mouth of the well of the Itzaes"

Some of the interesting things you can see in the archaeological site of Chichen Itza are "The sacred cenote" an old open cenote of about 60 meters in diameter that was the main stage for rituals with religious motifs. "The great ball game" in This field of the traditional ball game, you can see a combination of Mayan architecture combined with a decoration of Toltec influence, reflected in murals with representations of the god Kukulkan. "Temple of the jaguar" in this temple you can see images of jaguars as a collage adorned with two large pillars representing the feathered serpent. "Temple of the bearded man" is perhaps the best preserved structure in the archaeological site of Chichen Itza, it is a small three-level platform with a staircase that has the statue of a man with a large beard. "The observatory” this interesting circular structure is a clear example of the interest that the Mayan culture had in astronomy, in this structure windows were used to observe the sunset solstices, the stars and the position of Venus.

"The castle" is the main attraction of the Chichen Itza archaeological site, it is a large four-sided pyramid with a temple on top. It measures around 24 meters high and each side has a staircase of 91 steps plus one that leads to the temple at its top, giving a total of 356 steps. One for each day of the year. The base is adorned by two effigies in the shape of the head of the feathered serpent Kukulkan, which with each equinox create a spectacle of light and shadow that projects a serpent descending from the temple to the base of the pyramid.

¿ How to get to Chichen itza? 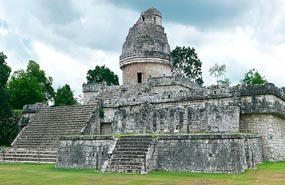 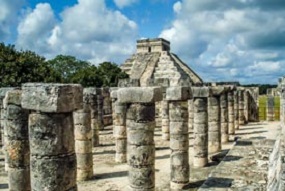